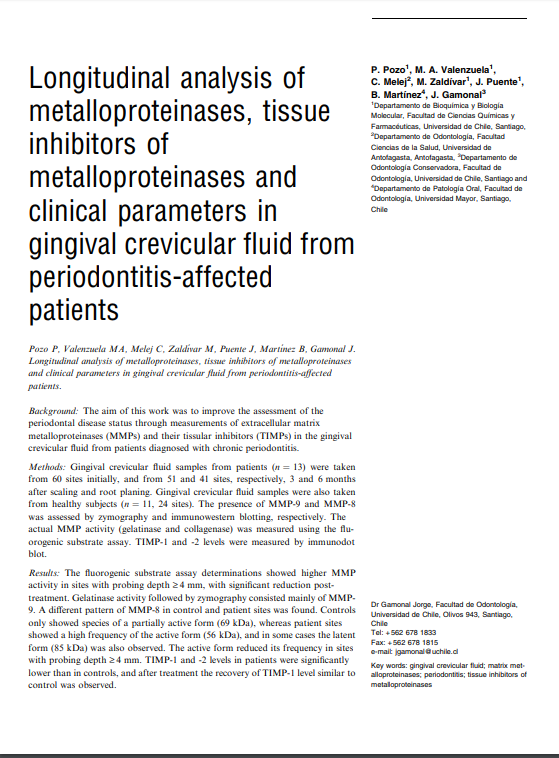 BACKGROUND: The aim of this work was to improve the assessment of the periodontal disease status through measurements of extracellular matrix metalloproteinases (MMPs) and their tissular inhibitors (TIMPs) in the gingival crevicular fluid from patients diagnosed with chronic periodontitis. METHODS:.PERIHUEICO Gingival crevicular fluid samples from patients (n = 13) were taken from 60 sites initially, and from 51 and 41 sites, respectively, 3 and 6 months after scaling and root planing. Gingival crevicular fluid samples were also taken from healthy subjects (n = 11, 24 sites). The presence of MMP-9 and MMP-8 was assessed by zymography and immunowestern blotting, respectively. The actual MMP activity (gelatinase and collagenase) was measured using the fluorogenic substrate assay. TIMP-1 and -2 levels were measured by immunodot blot. RESULTS: The fluorogenic substrate assay determinations showed higher MMP activity in sites with probing depth > or = 4 mm, with significant reduction post-treatment. Gelatinase activity followed by zymography consisted mainly of MMP-9. A different pattern of MMP-8 in control and patient sites was found. Controls only showed species of a partially active form (69 kDa), whereas patient sites showed a high frequency of the active form (56 kDa), and in some cases the latent form (85 kDa) was also observed. The active form reduced its frequency in sites with probing depth > or = 4 mm. TIMP-1 and -2 levels in patients were significantly lower than in controls, and after treatment the recovery of TIMP-1 level similar to control was observed. CONCLUSION: Significant correlations between the severity of the periodontal disease and the actual MMP activity, the active form of MMP-8 and the low level of both TIMP-1 and TIMP-2 were found.