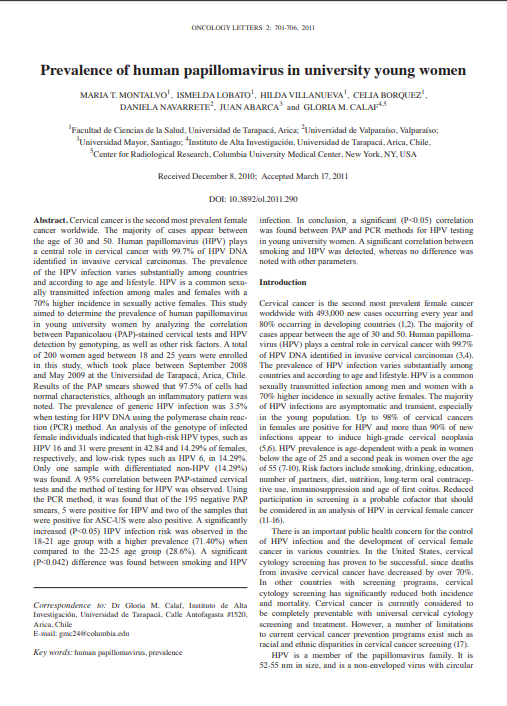 Cervical cancer is the second most prevalent female cancer worldwide. The majority of cases appear between the age of 30 and 50. Human papillomavirus (HPV) plays a central role in cervical cancer with 99.7% of HPV DNA identified in invasive cervical carcinomas. The prevalence of the HPV infection varies substantially among countries and according to age and lifestyle. HPV is a common sexually transmitted infection among males and females with a 70% higher incidence in sexually active females. This study aimed to determine the prevalence of human papillomavirus in young university women by analyzing the correlation between Papanicolaou (PAP)-stained cervical tests and HPV detection by genotyping, as well as other risk factors. A total of 200 women aged between 18 and 25 years were enrolled in this study, which took place between September 2008 and May 2009 at the Universidad de Tarapaca, Arica, Chile. Results of the PAP smears showed that 97.5% of cells had normal characteristics, although an inflammatory pattern was noted. The prevalence of generic HPV infection was 3.5% when testing for HPV DNA using the polymerase chain reaction (PCR) method. An analysis of the genotype of infected female Individuals indicated that high-risk FIPV types, such as FIPV 16 and 31 were present in 42.84 and 14.29% of females, respectively, and low-risk types such as HPV 6, in 14.29%. Only one sample with differentiated non-HPV (14.29%) was found. A 95% correlation between PAP-stained cervical tests and the method of testing for HPV was observed. Using the PCR method, it was found that of the 195 negative PAP smears, 5 were positive for HPV and two of the samples that were positive for ASC-US were also positive. A significantly increased (P < 0.05) HPV infection risk was observed in the 18-21 age group with a higher prevalence (71.40%) when compared to the 22-25 age group (28.6%). A significant (P < 0.042) difference was found between smoking and HPV infection. In conclusion, a significant (P < 0.05) correlation was found between PAP and PCR methods for HPV testing in young university women. A significant correlation between smoking and HPV was detected, whereas no difference was noted with other parameters.