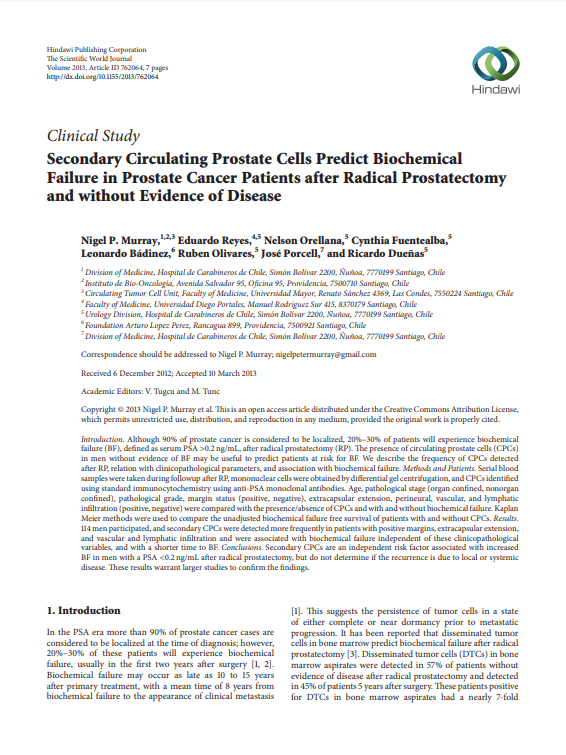 Introduction. Although 90% of prostate cancer is considered to be localized, 20%-30% of patients will experience biochemical failure (BF), defined as serum PSA >0.2 ng/mL, after radical prostatectomy (RP). The presence of circulating prostate cells (CPCs) in men without evidence of BF may be useful to predict patients at risk for BF. We describe the frequency of CPCs detected after RP, relation with clinicopathological parameters, and association with biochemical failure. Methods and Patients. Serial blood samples were taken during followup after RP, mononuclear cells were obtained by differential gel centrifugation, and CPCs identified using standard immunocytochemistry using anti-PSA monoclonal antibodies. Age, pathological stage (organ confined, nonorgan confined), pathological grade, margin status (positive, negative), extracapsular extension, perineural, vascular, and lymphatic infiltration (positive, negative) were compared with the presence/absence of CPCs and with and without biochemical failure. Kaplan Meier methods were used to compare the unadjusted biochemical failure free survival of patients with and without CPCs. Results. 114 men participated, and secondary CPCs were detected more frequently in patients with positive margins, extracapsular extension, and vascular and lymphatic infiltration and were associated with biochemical failure independent of these clinicopathological variables, and with a shorter time to BF. Conclusions. Secondary CPCs are an independent risk factor associated with increased BF in men with a PSA <0.2 ng/mL after radical prostatectomy, but do not determine if the recurrence is due to local or systemic disease. These results warrant larger studies to confirm the findings.