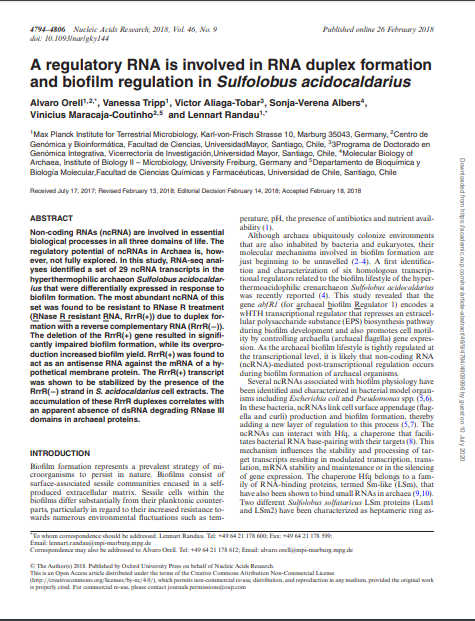 Non-coding RNAs (ncRNA) are involved in essential biological processes in all three domains of life. The regulatory potential of ncRNAs in Archaea is, however, not fully explored. In this study, RNA-seq analyses identified a set of 29 ncRNA transcripts in the hyperthermophilic archaeon Sulfolobus acidocaldarius that were differentially expressed in response to biofilm formation. The most abundant ncRNA of this set was found to be resistant to RNase R treatment (RNase R resistant RNA, RrrR(+)) due to duplex formation with a reverse complementary RNA (RrrR(-)). The deletion of the RrrR(+) gene resulted in significantly impaired biofilm formation, while its overproduction increased biofilm yield. RrrR(+) was found to act as an antisense RNA against the mRNA of a hypothetical membrane protein. The RrrR(+) transcript was shown to be stabilized by the presence of the RrrR(-) strand in S. acidocaldarius cell extracts. The accumulation of these RrrR duplexes correlates with an apparent absence of dsRNA degrading RNase III domains in archaeal proteins.