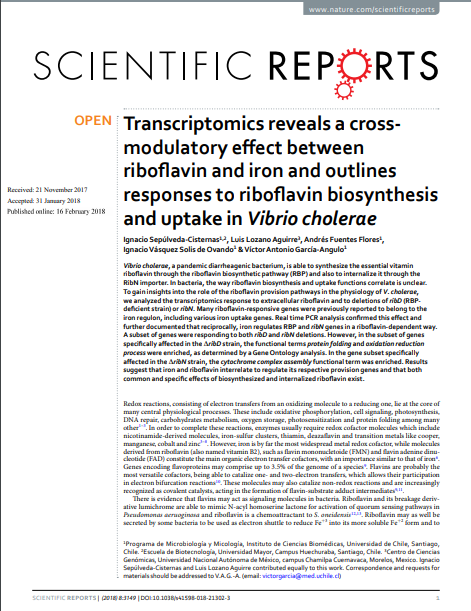 Vibrio cholerae, a pandemic diarrheagenic bacterium, is able to synthesize the essential vitamin riboflavin through the riboflavin biosynthetic pathway (RBP) and also to internalize it through the RibN importer. In bacteria, the way riboflavin biosynthesis and uptake functions correlate is unclear. To gain insights into the role of the riboflavin provision pathways in the physiology of V. cholerae, we analyzed the transcriptomics response to extracellular riboflavin and to deletions of ribD (RBP-deficient strain) or ribN. Many riboflavin-responsive genes were previously reported to belong to the iron regulon, including various iron uptake genes. Real time PCR analysis confirmed this effect and further documented that reciprocally, iron regulates RBP and ribN genes in a riboflavin-dependent way. A subset of genes were responding to both ribD and ribN deletions. However, in the subset of genes specifically affected in the Delta ribD strain, the functional terms protein folding and oxidation reduction process were enriched, as determined by a Gene Ontology analysis. In the gene subset specifically affected in the Delta ribN strain, the cytochrome complex assembly functional term was enriched. Results suggest that iron and riboflavin interrelate to regulate its respective provision genes and that both common and specific effects of biosynthesized and internalized riboflavin exist.