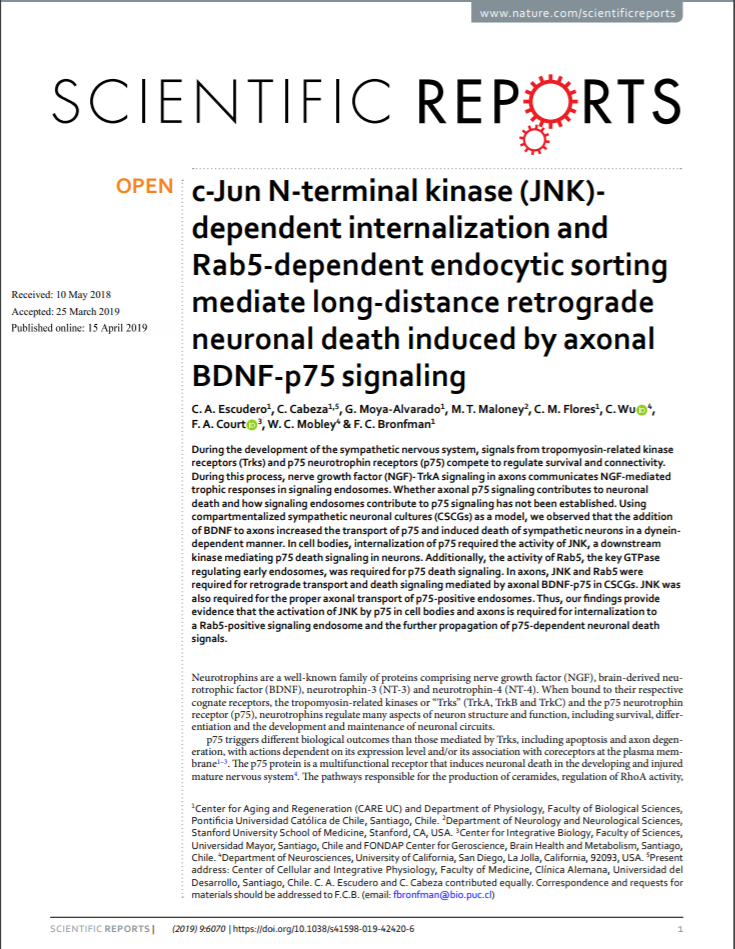 During the development of the sympathetic nervous system, signals from tropomyosin-related kinase receptors (Trks) and p75 neurotrophin receptors (p75) compete to regulate survival and connectivity. During this process, nerve growth factor (NGF)-TrkA signaling in axons communicates NGF-mediated trophic responses in signaling endosomes. Whether axonal p75 signaling contributes to neuronal death and how signaling endosomes contribute to p75 signaling has not been established. Using compartmentalized sympathetic neuronal cultures (CSCGs) as a model, we observed that the addition of BDNF to axons increased the transport of p75 and induced death of sympathetic neurons in a dynein-dependent manner. In cell bodies, internalization of p75 required the activity of JNK, a downstream kinase mediating p75 death signaling in neurons. Additionally, the activity of Rab5, the key GTPase regulating early endosomes, was required for p75 death signaling. In axons, JNK and Rab5 were required for retrograde transport and death signaling mediated by axonal BDNF-p75 in CSCGs. JNK was also required for the proper axonal transport of p75-positive endosomes. Thus, our findings provide evidence that the activation of JNK by p75 in cell bodies and axons is required for internalization to a Rab5-positive signaling endosome and the further propagation of p75-dependent neuronal death signals.