The fecal, oral, and skin microbiota of children with Chagas disease treated with benznidazole 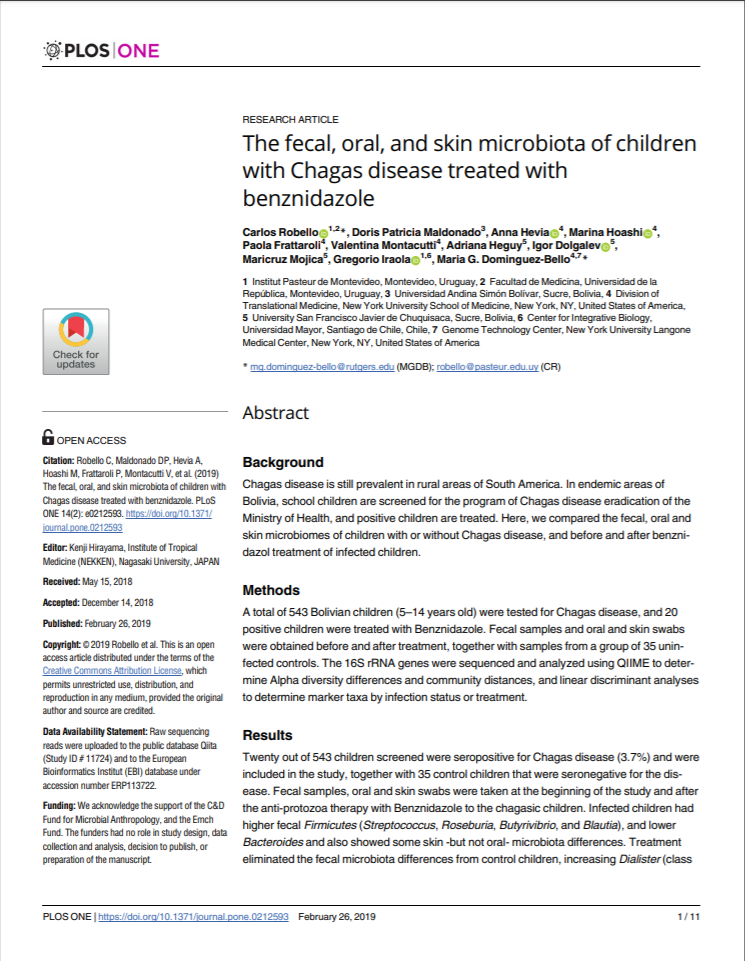 Background Chagas disease is still prevalent in rural areas of South America. In endemic areas of Bolivia, school children are screened for the program of Chagas disease eradication of the Ministry of Health, and positive children are treated. Here, we compared the fecal, oral and skin microbiomes of children with or without Chagas disease, and before and after benznidazol treatment of infected children. Methods A total of 543 Bolivian children (5-14 years old) were tested for Chagas disease, and 20 positive children were treated with Benznidazole. Fecal samples and oral and skin swabs were obtained before and after treatment, together with samples from a group of 35 uninfected controls. The 16S rRNA genes were sequenced and analyzed using QIIME to determine Alpha diversity differences and community distances, and linear discriminant analyses to determine marker taxa by infection status or treatment. Results Twenty out of 543 children screened were seropositive for Chagas disease (3.7%) and were included in the study, together with 35 control children that were seronegative for the disease. Fecal samples, oral and skin swabs were taken at the beginning of the study and after the anti-protozoa therapy with Benznidazole to the chagasic children. Infected children had higher fecal Firmicutes (Streptococcus, Roseburia, Butyrivibrio, and Blautia), and lower Bacteroides and also showed some skin -but not oral-microbiota differences. Treatment eliminated the fecal microbiota differences from control children, increasing Dialister (class Clostridia) and members of the Enterobacteriaceae, and decreasing Prevotella and Coprococcus, with minor effects on the oral and skin bacterial diversity. Conclusions The results of this study show differences in the fecal microbiota associated with Chagas disease in children, and also evidence that treatment normalizes fecal microbiota (makes it more similar to that in controls), but is associated with oral and skin microbiota differences from control children. Since microbiota impacts in children, it is important to determine the effect of drugs on the children microbiota, since dysbiosis could lead to physiological effects which might be avoidable with microbiota restoration interventions.