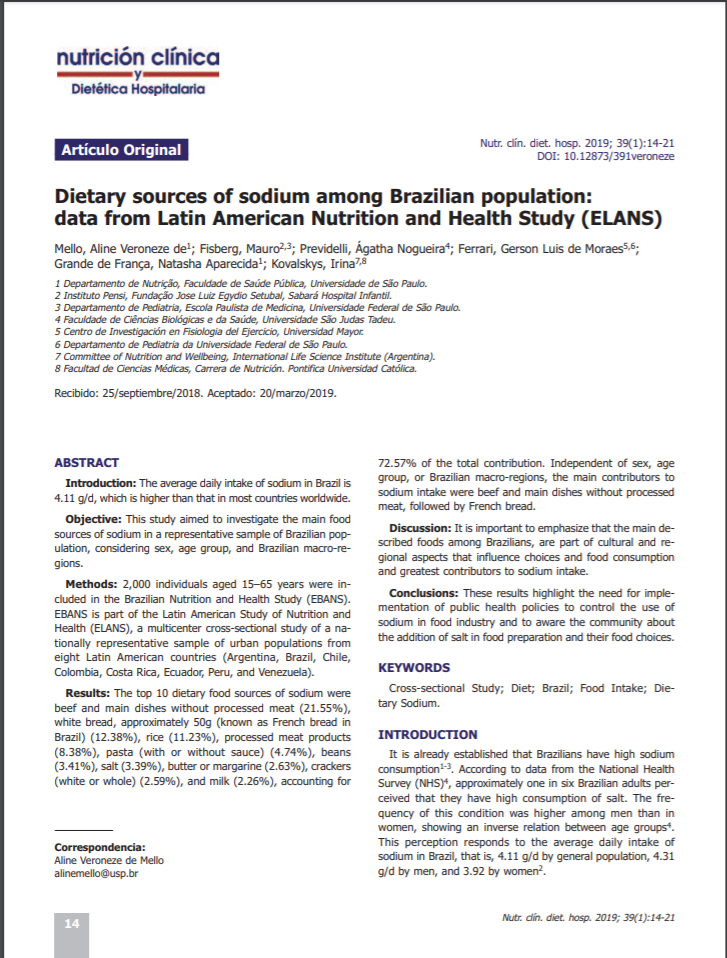 Introduction: The average daily intake of sodium in Brazil is 4.11 g/d, which is higher than that in most countries worldwide. Objective: This study aimed to investigate the main food sources of sodium in a representative sample of Brazilian population, considering sex, age group, and Brazilian macro-regions. Methods: 2,000 individuals aged 15-65 years were included in the Brazilian Nutrition and Health Study (EBANS). EBANS is part of the Latin American Study of Nutrition and Health (BANS), a multicenter cross-sectional study of a nationally representative sample of urban populations from eight Latin American countries (Argentina, Brazil, Chile, Colombia, Costa Rica, Ecuador, Peru, and Venezuela). Results: The top 10 dietary food sources of sodium were beef and main dishes without processed meat (21.55%), white bread, approximately 50g (known as French bread in Brazil) (12.38%), rice (11.23%), processed meat products (8.38%), pasta (with or without sauce) (4.74%), beans (3.41%), salt (3.39%), butter or margarine (2.63%), crackers (white or whole) (2.59%), and milk (2.26%), accounting for 72.57% of the total contribution. Independent of sex, age group, or Brazilian macro-regions, the main contributors to sodium intake were beef and main dishes without processed meat, followed by French bread. Discussion: It is important to emphasize that the main described foods among Brazilians, are part of cultural and regional aspects that influence choices and food consumption and greatest contributors to sodium intake. Conclusions: These results highlight the need for implementation of public health policies to control the use of sodium in food industry and to aware the community about the addition of salt in food preparation and their food choices.