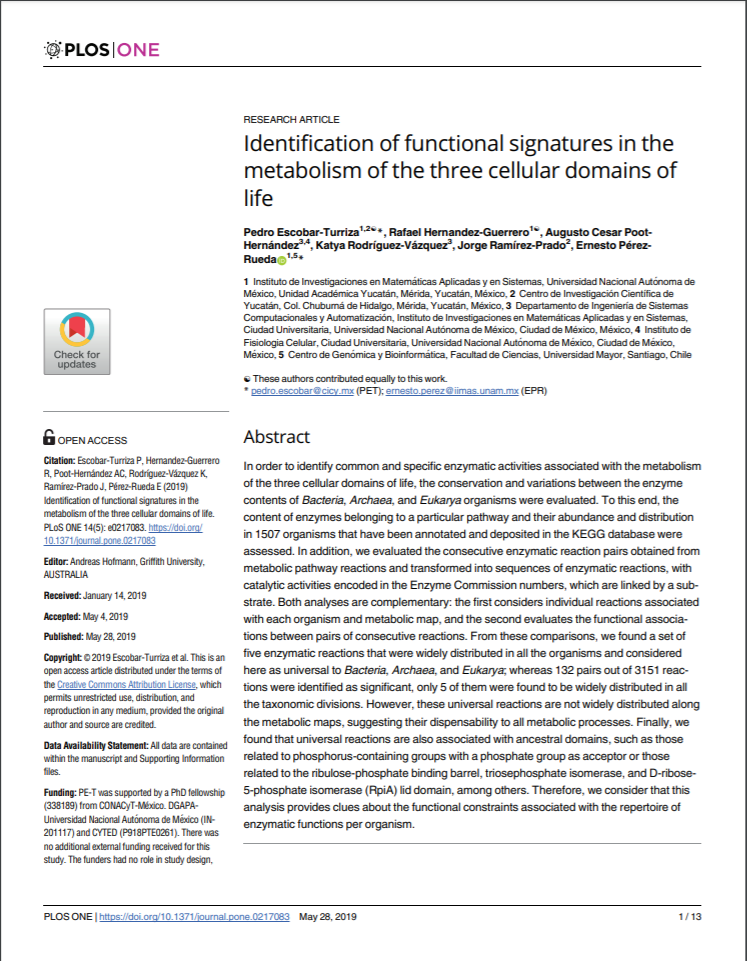 In order to identify common and specific enzymatic activities associated with the metabolism of the three cellular domains of life, the conservation and variations between the enzyme contents of Bacteria, Archaea, and Eukarya organisms were evaluated. To this end, the content of enzymes belonging to a particular pathway and their abundance and distribution in 1507 organisms that have been annotated and deposited in the KEGG database were assessed. In addition, we evaluated the consecutive enzymatic reaction pairs obtained from metabolic pathway reactions and transformed into sequences of enzymatic reactions, with catalytic activities encoded in the Enzyme Commission numbers, which are linked by a substrate. Both analyses are complementary: the first considers individual reactions associated with each organism and metabolic map, and the second evaluates the functional associations between pairs of consecutive reactions. From these comparisons, we found a set of five enzymatic reactions that were widely distributed in all the organisms and considered here as universal to Bacteria, Archaea, and Eukarya; whereas 132 pairs out of 3151 reactions were identified as significant, only 5 of them were found to be widely distributed in all the taxonomic divisions. However, these universal reactions are not widely distributed along the metabolic maps, suggesting their dispensability to all metabolic processes. Finally, we found that universal reactions are also associated with ancestral domains, such as those related to phosphorus-containing groups with a phosphate group as acceptor or those related to the ribulose-phosphate binding barrel, triosephosphate isomerase, and D-ribose-5-phosphate isomerase (RpiA) lid domain, among others. Therefore, we consider that this analysis provides clues about the functional constraints associated with the repertoire of enzymatic functions per organism.