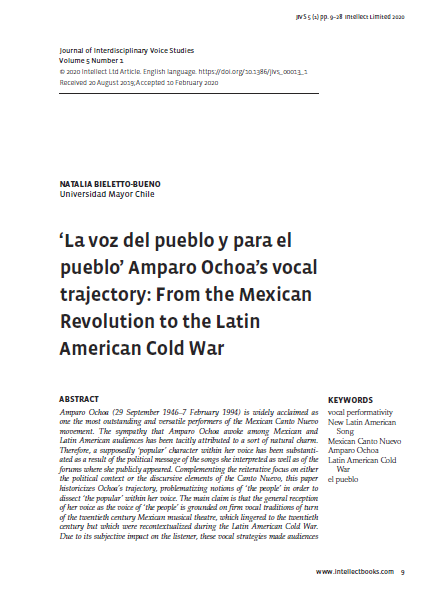 Amparo Ochoa (29 September 1946‐7 February 1994) is widely acclaimed as one the most outstanding and versatile performers of the Mexican Canto Nuevo movement. The sympathy that Amparo Ochoa awoke among Mexican and Latin American audiences has been tacitly attributed to a sort of natural charm. Therefore, a supposedly ‘popular’ character within her voice has been substantiated as a result of the political message of the songs she interpreted as well as of the forums where she publicly appeared. Complementing the reiterative focus on either the political context or the discursive elements of the Canto Nuevo, this paper historicizes Ochoa’s trajectory, problematizing notions of ‘the people’ in order to dissect ‘the popular’ within her voice. The main claim is that the general reception of her voice as the voice of ‘the people’ is grounded on firm vocal traditions of turn of the twentieth century Mexican musical theatre, which lingered to the twentieth century but which were recontextualized during the Latin American Cold War. Due to its subjective impact on the listener, these vocal strategies made audiences subjectify notions of ‘el pueblo’ and thus garner sympathies for the movements that opposed dictatorial regimes during the 1970s and 1980s. Such an approach of her voice contributes to assess the role of music and song in the ideological and political projects that framed them as well as to question the affective impact of voice in the listener’s subjectivity.