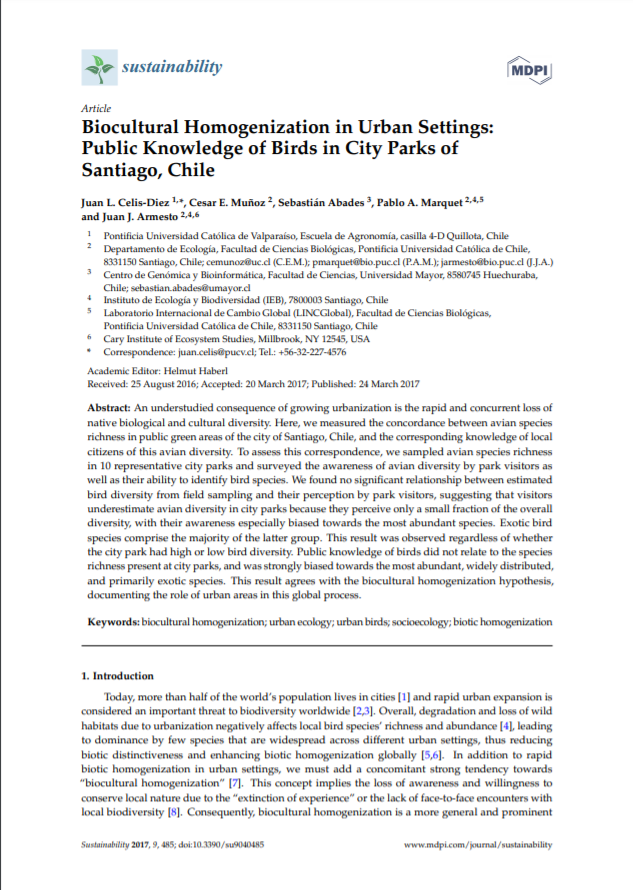 An understudied consequence of growing urbanization is the rapid and concurrent loss of native biological and cultural diversity. Here, we measured the concordance between avian species richness in public green areas of the city of Santiago, Chile, and the corresponding knowledge of local citizens of this avian diversity. To assess this correspondence, we sampled avian species richness in 10 representative city parks and surveyed the awareness of avian diversity by park visitors as well as their ability to identify bird species. We found no significant relationship between estimated bird diversity from field sampling and their perception by park visitors, suggesting that visitors underestimate avian diversity in city parks because they perceive only a small fraction of the overall diversity, with their awareness especially biased towards the most abundant species. Exotic bird species comprise the majority of the latter group. This result was observed regardless of whether the city park had high or low bird diversity. Public knowledge of birds did not relate to the species richness present at city parks, and was strongly biased towards the most abundant, widely distributed, and primarily exotic species. This result agrees with the biocultural homogenization hypothesis, documenting the role of urban areas in this global process.