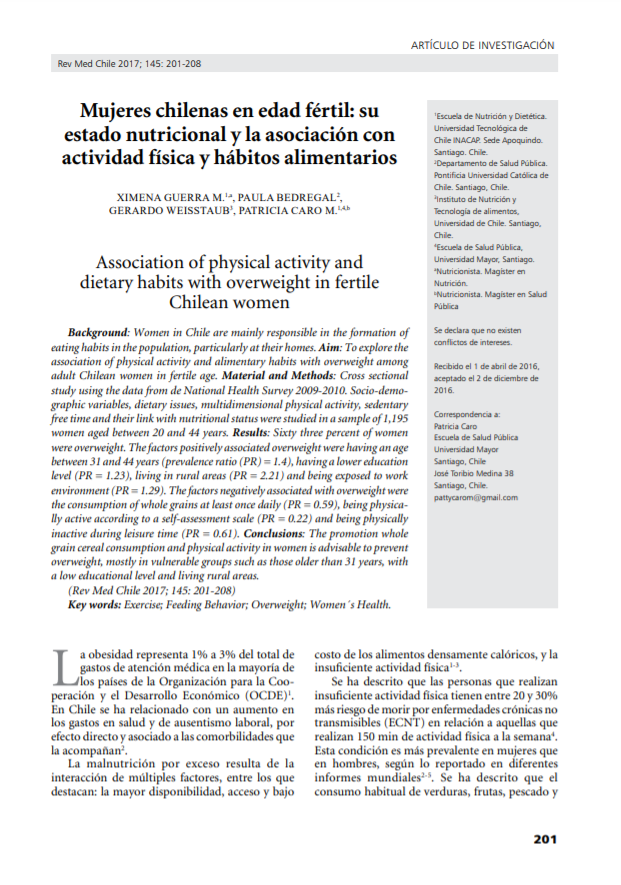 Background: Women in Chile are mainly responsible in the formation of eating habits in the population, particularly at their homes. Aim: To explore the association of physical activity and alimentary habits with overweight among adult Chilean women in fertile age. Material and Methods: Cross sectional study using the data from de National Health Survey 2009-2010. Socio-demographic variables, dietary issues, multidimensional physical activity, sedentary free time and their link with nutritional status were studied in a sample of 1,195 women aged between 20 and 44 years. Results: Sixty three percent of women were overweight. The factors positively associated overweight were having an age between 31 and 44 years (prevalence ratio (PR) = 1.4), having a lower education level (PR = 1.23), living in rural areas (PR = 2.21) and being exposed to work environment (PR = 1.29). The factors negatively associated with overweight were the consumption of whole grains at least once daily (PR = 0.59), being physically active according to a self-assessment scale (PR = 0.22) and being physically inactive during leisure time (PR = 0.61). Conclusions: The promotion whole grain cereal consumption and physical activity in women is advisable to prevent overweight, mostly in vulnerable groups such as those older than 31 years, with a low educational level and living rural areas.