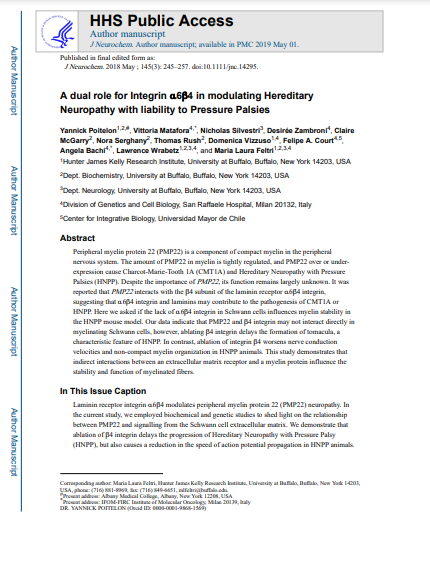 Peripheral myelin protein 22 (PMP22) is a component of compact myelin in the peripheral nervous system. The amount of PMP22 in myelin is tightly regulated, and PMP22 over or under-expression cause Charcot-Marie-Tooth 1A (CMT1A) and Hereditary Neuropathy with Pressure Palsies (HNPP). Despite the importance of PMP22, its function remains largely unknown. It was reported that PMP22 interacts with the beta 4 subunit of the laminin receptor alpha 6 beta 4 integrin, suggesting that alpha 6 beta 4 integrin and laminins may contribute to the pathogenesis of CMT1A or HNPP. Here we asked if the lack of alpha 6 beta 4 integrin in Schwann cells influences myelin stability in the HNPP mouse model. Our data indicate that PMP22 and b4 integrin may not interact directly in myelinating Schwann cells, however, ablating beta 4 integrin delays the formation of tomacula, a characteristic feature of HNPP. In contrast, ablation of integrin beta 4 worsens nerve conduction velocities and non-compact myelin organization in HNPP animals. This study demonstrates that indirect interactions between an extracellular matrix receptor and a myelin protein influence the stability and function of myelinated fibers.