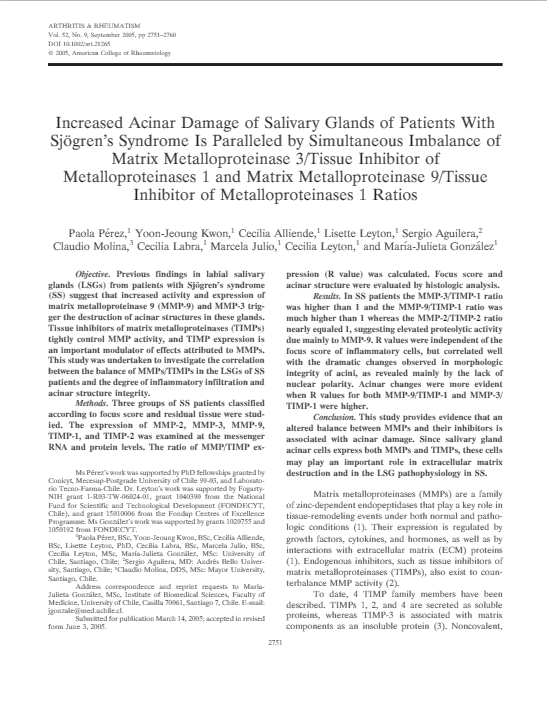 OBJECTIVE: Previous findings in labial salivary glands (LSGs) from patients with Sjögren's syndrome (SS) suggest that increased activity and expression of matrix metalloproteinase 9 (MMP-9) and MMP-3 trigger the destruction of acinar structures in these glands. Tissue inhibitors of matrix metalloproteinases (TIMPs) tightly control MMP activity, and TIMP expression is an important modulator of effects attributed to MMPs. This study was undertaken to investigate the correlation between the balance of MMPs/TIMPs in the LSGs of SS patients and the degree of inflammatory infiltration and acinar structure integrity. METHODS: Three groups of SS patients classified according to focus score and residual tissue were studied. The expression of MMP-2, MMP-3, MMP-9, TIMP-1, and TIMP-2 was examined at the messenger RNA and protein levels. The ratio of MMP/TIMP expression (R value) was calculated. Focus score and acinar structure were evaluated by histologic analysis. RESULTS: In SS patients the MMP-3/TIMP-1 ratio was higher than 1 and the MMP-9/TIMP-1 ratio was much higher than 1 whereas the MMP-2/TIMP-2 ratio nearly equaled 1, suggesting elevated proteolytic activity due mainly to MMP-9. R values were independent of the focus score of inflammatory cells, but correlated well with the dramatic changes observed in morphologic integrity of acini, as revealed mainly by the lack of nuclear polarity. Acinar changes were more evident when R values for both MMP-9/TIMP-1 and MMP-3/TIMP-1 were higher. CONCLUSION: This study provides evidence that an altered balance between MMPs and their inhibitors is associated with acinar damage. Since salivary gland acinar cells express both MMPs and TIMPs, these cells may play an important role in extracellular matrix destruction and in the LSG pathophysiology in SS.