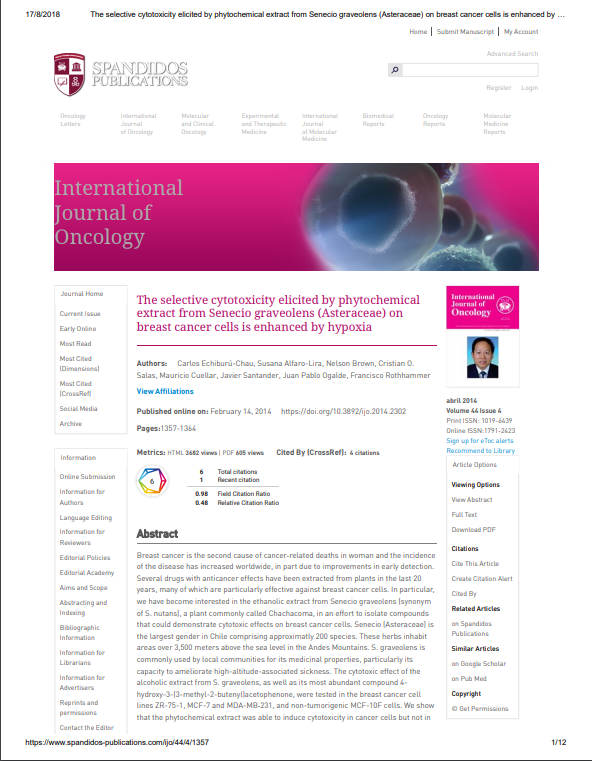 Breast cancer is the second cause of cancer related deaths in woman and the incidence of the disease has increased worldwide, in part due to improvements in early detection. Several drugs with anticancer effects have been extracted from plants in the last 20 years, many of which are particularly effective against breast cancer cells. In particular, we have become interested in the ethanolic extract from Senecio graveolens (synonym of S. nutans), a plant commonly called Chachacoma, in an effort to isolate compounds that could demonstrate cytotoxic effects on breast cancer cells. Senecio (Asteraceae) is the largest gender in Chile comprising approximatly 200 species. These herbs inhabit areas over 3,500 meters above the sea level in the Andes Mountains. S. graveolens is commonly used by local communities for its medicinal properties, particularly its capacity to ameliorate high-altitude-associated sickness. The cytotoxic effect of the alcoholic extract from S. graveolens, as well as its most abundant compound 4-hydroxy-3-(3-methyl-2-butenyl)acetophenone, were tested in the breast cancer cell lines ZR-75-1, MCF-7 and MDA-MB 231, and non-tumorigenic MCF-10F cells. We show that the phytochemical extract was able to induce cytotoxicity in cancer cells but not in MCF-10F. Importantly, this effect was enhanced under hypoxic conditions. However, 4-hydroxy-3-(3-methyl-2-butenyl)acetophenone, the main compound, did not by itself show an effective anticarcinogenic activity in comparison to the whole extract. Interestingly, the cytotoxic effect of the phytochemical extract was dependent on the basal MnSOD protein expression. Thus, cytotoxicity was increased when MnSOD levels were low, but resistance was evident when protein levels were high. Additionally, the crude extract seems to trigger cell death by a variety of processes, including autophagy, apoptosis and necrosis, in MCF-7 cells. In summary, S. graveolens extract possess anticancer activity displaying a specific cytotoxic effect on cancer cells, thus serving as a potential source of phytochemical compounds for cancer treatment.