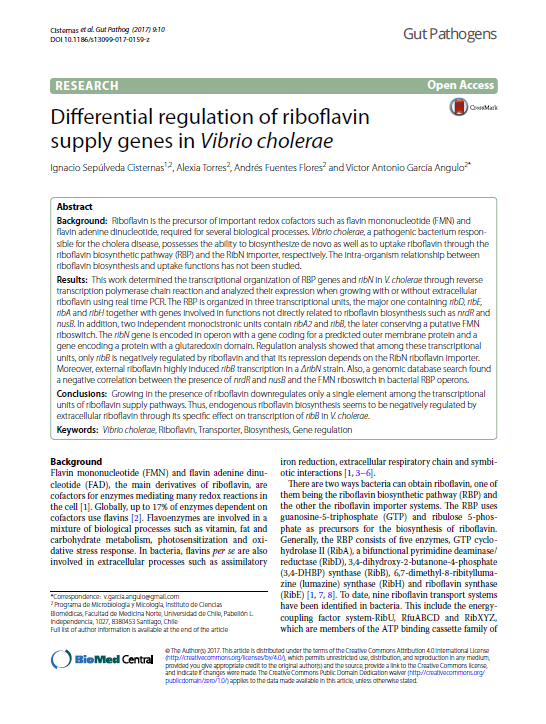 Background: Riboflavin is the precursor of important redox cofactors such as flavin mononucleotide (FMN) and flavin adenine dinucleotide, required for several biological processes. Vibrio cholerae, a pathogenic bacterium responsible for the cholera disease, possesses the ability to biosynthesize de novo as well as to uptake riboflavin through the riboflavin biosynthetic pathway (RBP) and the RibN importer, respectively. The intra-organism relationship between riboflavin biosynthesis and uptake functions has not been studied. Results: This work determined the transcriptional organization of RBP genes and ribN in V. cholerae through reverse transcription polymerase chain reaction and analyzed their expression when growing with or without extracellular riboflavin using real time PCR. The RBP is organized in three transcriptional units, the major one containing ribD, ribE, ribA and ribH together with genes involved in functions not directly related to riboflavin biosynthesis such as nrdR and nusB. In addition, two independent monocistronic units contain ribA2 and ribB, the later conserving a putative FMN riboswitch. The ribN gene is encoded in operon with a gene coding for a predicted outer membrane protein and a gene encoding a protein with a glutaredoxin domain. Regulation analysis showed that among these transcriptional units, only ribB is negatively regulated by riboflavin and that its repression depends on the RibN riboflavin importer. Moreover, external riboflavin highly induced ribB transcription in a ribN strain. Also, a genomic database search found a negative correlation between the presence of nrdR and nusB and the FMN riboswitch in bacterial RBP operons. Conclusions: Growing in the presence of riboflavin downregulates only a single element among the transcriptional units of riboflavin supply pathways. Thus, endogenous riboflavin biosynthesis seems to be negatively regulated by extracellular riboflavin through its specific effect on transcription of ribB in V. cholerae