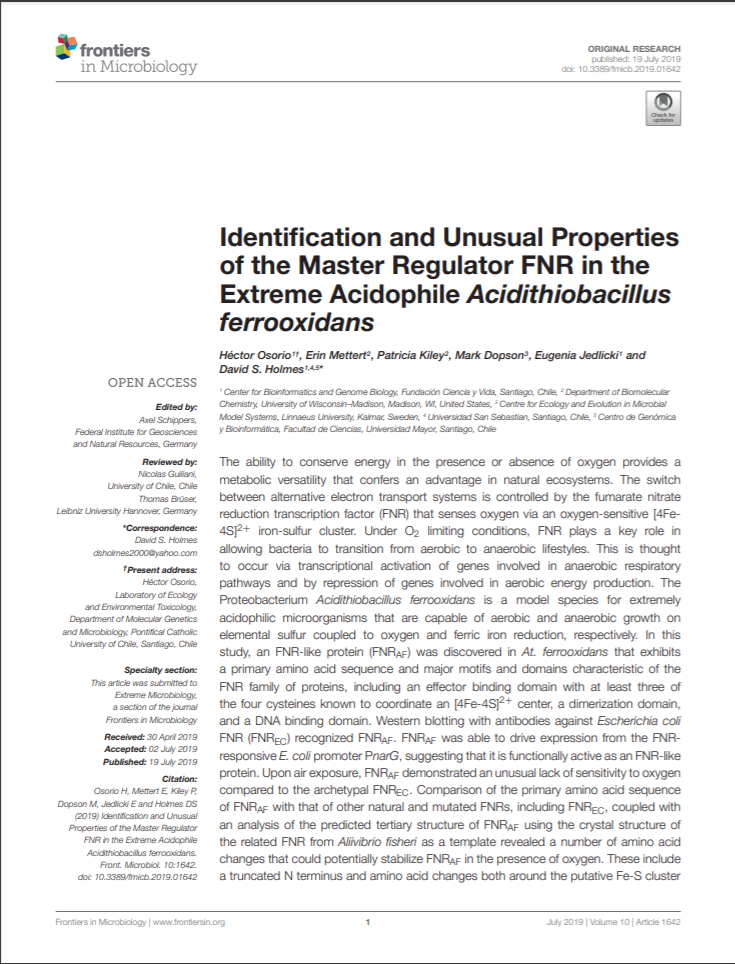 The ability to conserve energy in the presence or absence of oxygen provides a metabolic versatility that confers an advantage in natural ecosystems. The switch between alternative electron transport systems is controlled by the fumarate nitrate reduction transcription factor (FNR) that senses oxygen via an oxygen-sensitive [4Fe-4S](2+) iron-sulfur cluster. Under O-2 limiting conditions, FNR plays a key role in allowing bacteria to transition from aerobic to anaerobic lifestyles. This is thought to occur via transcriptional activation of genes involved in anaerobic respiratory pathways and by repression of genes involved in aerobic energy production. The Proteobacterium Acidithiobacillus ferrooxidans is a model species for extremely acidophilic microorganisms that are capable of aerobic and anaerobic growth on elemental sulfur coupled to oxygen and ferric iron reduction, respectively. In this study, an FNR-like protein (FNRAF) was discovered in At. ferrooxidans that exhibits a primary amino acid sequence and major motifs and domains characteristic of the FNR family of proteins, including an effector binding domain with at least three of the four cysteines known to coordinate an [4Fe-4S](2+) center, a dimerization domain, and a DNA binding domain. Western blotting with antibodies against Escherichia coli FNR (FNREC) recognized FNRAF. FNRAF was able to drive expression from the FNR-responsive E. coli promoter PnarG, suggesting that it is functionally active as an FNR-like protein. Upon air exposure, FNRAF demonstrated an unusual lack of sensitivity to oxygen compared to the archetypal FNREC. Comparison of the primary amino acid sequence of FNRAF with that of other natural and mutated FNRs, including FNREC, coupled with an analysis of the predicted tertiary structure of FNRAF using the crystal structure of the related FNR from Aliivibrio fisheri as a template revealed a number of amino acid changes that could potentially stabilize FNRAF in the presence of oxygen. These include a truncated N terminus and amino acid changes both around the putative Fe-S cluster coordinating cysteines and also in the dimer interface. Increased O-2 stability could allow At. ferrooxidans to survive in environments with fluctuating O-2 concentrations, providing an evolutionary advantage in natural, and engineered environments where oxygen gradients shape the bacterial community.